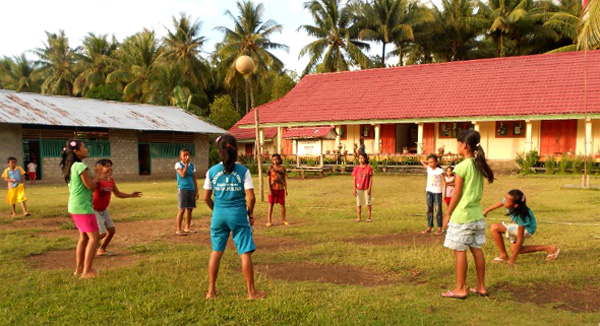 It is true that Talaud Regency is known for its beautiful beaches and islands. However, tourists should not overlook the presence of local villages like Bulude. This one is located in Kabaruan Island, which is in the south of Salebabu Island. Despite the long trip, no one would regret in visiting the site during holidays. Not only it features a challenging trip, tourists are able to learn more about local culture once they arrive at the village later. Plus, they can enjoy stunning views of the sea due to the fact that the village is located near to the shore.

The Nuance
As mentioned before, Bulude Village is located near to the sea. This explains why the majority of villagers work as a fisherman. What about the nuance? Well, like other traditional villages, it hasn’t affected by modernism yet. The humble way of living of villagers looks so soothing, for sure. The problem is that the road doesn’t come with a good condition, so tourists should give more efforts in reaching the village later. Have no worries. Lush trees and peaceful environment may soothe them during exploration.

Exploring Bulude Village
Here is the fact. Bulude Village has become one of the points of pride of the nation, due to its amazing nuance and beautiful environment. This coastal village even gets a significant attention from the government. That means tourists may expect lots improvement in the future, including the facilities and accommodations. Even though it takes some time to get to the location, the trip would not be boring at all. As long as tourists come with a local guide, they can easily reach the village without hassles.

Once arriving at Bulude Village, tourists can feel the peaceful ambiance right away. It is because the village is surrounded by lush and dense trees. Plus, the locals live in a traditional way so there won’t be too much noise caused by machines and electronics. If tourists come at the right time, they are able to join the local ceremony as well. It is often done when a member of the village has returned from his adventure outside the region.

The next allure of Bulude Village is definitely culinary. Sago is the most popular dish there, so tourists should not miss the chance to try it. Later, before going back home, visitors should join a famous local festival called Mane’e. Usually, it is done between May and June. During the event, people gather at the shore and catch fishes together! What a fun and festive event!

How to Get There
From the capital of North Sulawesi Province, Manado City, tourists should get an airplane service and head to Talaud Regency right away. The flight takes off from Sam Ratulangi International Airport and heads to Melonguane Airport at Karakelong Island. It takes around 1 hour and 5 minutes to get there. Once arriving at Melonguane City, they should get a boat service and head to Kabaruang Island where the village resides. The voyage takes around 2.5 hours.