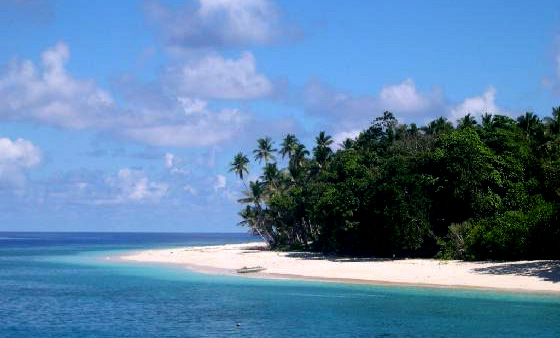 Located near to Lobbo Village, several beautiful islands reside including the one called Nusa Dolong. They belong to Talaud Regency of Indonesia. So, what makes that one famous? Aside from the beauty, the island also offers an interesting history related to the colonial era. Many people also call it Jolly Island, which the reason will be explained later. In a nutshell, tourists keep coming to the island to enjoy numerous activities like relaxation, snorkeling, learning history, and photography. Well, those who never visit it before should read more information here.

The Nuance
When it comes to size, Nusa Dolong Island is considered small. Still, like other islands of Talaud Regency, it comes with fabulous beaches. Once arriving at the coast, a peaceful ambiance and refreshing air welcome everyone. Some local fishermen boats are also seen on the horizon. Not to mention the waves are small, which are perfect for snorkeling and swimming. Another wonderful allure of the island is the sunset. The orange sky looks both soothing and romantic, especially if it is seen from the beach! This explains why photography also becomes a popular thing to do in Nusa Dolong.

Exploring Nusa Dolong Island
People have different reasons for visiting Nusa Dolong (Jolly) Island. Most of them want to learn the history, though. The name “Jolly” derives from the Dutch’s sea lieutenant name. He died during the war against Balangingi Pirate in Beo Cape back then. This also explains why tourists may find his tomb on the island (which also becomes a reason to come to Nusa Dolong). For further information regarding the history of the island, tourists can ask either villagers or a tour guide later.

The next interesting fact is that Nusa Dolong Island is also related to the first influence of the gospel or Christian to Talaud Islands. No wonder, such historical value makes the island more valuable to both government and nearby villagers. At least, it helps them to lure more tourists to come to the island. Yet, it is more than just history. The island also has beautiful landscape and scenery for tourists to enjoy while in Indonesia. Visitors even have the chance to ride a local fishermen’s boat on the shore!

The best spots to visit while spending a vacation in Nusa Dolong Island are Makatara, Awit, and Lobbo Village. Also, tourists should not miss the chance to visit Beo Cape where they can enjoy swimming and photography. Make sure to carry extra cash to pay the boat service, though.

How to Get There
For the information, the location is near to Nusa Topor Island. Those who come from Manado City, though, they should get an airplane service at Sam Ratulangi International Airport and head to Melonguane City right away. The flight takes about 1 hour and 5 minutes. Upon the arrival, tourists should get a boat service at Lobbo Village by heading to North Beo Sub-District. This voyage may take around 2 hours.