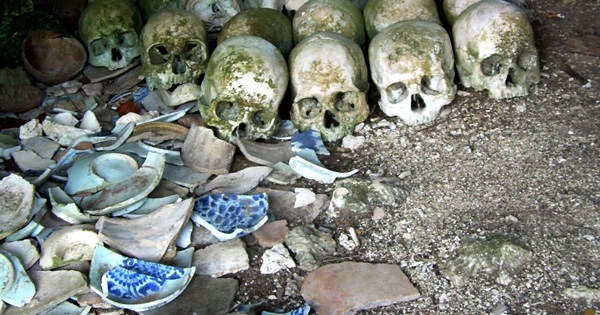 It is not surprising that Talaud Regency also owns several unique caves for tourists to explore during a holiday. For example, there is Totombatu Cave located in South Beo Sub-District. To be exact, it resides in Tarohan Village and located on a hill in the tip of a shoreline! Not only the cave offers a mystical atmosphere, but it also has stunning natural scenery so tourists are able to enjoy sightseeing and photography during the visit later. Not to mention the location is a little bit secluded, which is suitable for natural exploration and trekking.

The Nuance
As mentioned before, the cave is located on a small rocky hill having the height of 8 meters. Also, it is located near to the sea! No wonder, tourists are able to feel the breezy wind once they arrive at the location. The next unique fact is that the cave comes with various rocky structures including limestone, coral reefs, and others. Many trees and bushes also surround the site! Here is the best feature. The cave stores about 33 skulls and various types of skeletons! This explains why the nuance feels so mystical and a little bit creepy.

Exploring Totombatu Cave
Sightseeing and exploration become two prime activities that tourists often do in Totombatu Cave. In fact, from the site, they are able to see beautiful neighboring islands like Nusa and Salibabu. Here is the tip. Everyone should only come during a good weather. It is also important to carry a camera, so they are able to collect several beautiful pictures of nature. Even the cave becomes a nice background for photography.

The next interesting feature of Totombatu Cave is the presence of skulls and bones! Tourists can see these inside the cave, after all. According to villagers, there are more than a hundred of bones there. Unfortunately, some of them have disappeared due to thievery. Aside from those scary objects, tourists can also find several historical items like jars and plates. Due to such valuable history, the locals work hard to take care of the cave these days. They want to attract more tourists to come to the cave as well.

For visitors, they must pay attention to several things during exploration in Indonesia. The most important one is that they are not allowed to litter. When it comes to photography, everyone is allowed to take pictures either outside or inside the cave. However, they should not cause havoc and damage during the activity. In order to avoid any issues, it is recommended to come with a tour guide though. Even though it costs some money, the service helps everyone to explore the cave in a more proper manner.

How to Get There
For those coming from Manado, they can take advantage of an airplane service at Sam Ratulangi International Airport and head to Meluangane Airport at Talaud Regency. The flight may take about 1 hour and 5 minutes. Once arriving at Melonguane City, tourists only need to spend approximately 2.5 hours to get to the cave.