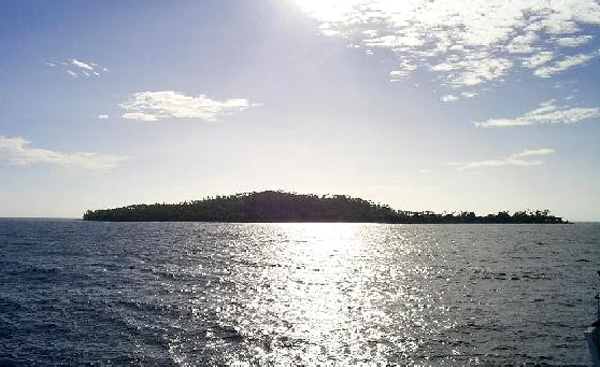 Being one of the best islands in Talaud Regency, Kokorotan has lured more tourists over time. The location is in the north of Karakelong Island and it is bordering with a neighboring country Philippine. Despite the secluded location, the island is inhabited by local people so tourists may expect proper facilities there. In terms of region, it resides close to Intata Island (which is in the south of it). Tourists are interested in visiting the island due to its beautiful shores and unique traditions owned by Kakorotan People.

The Nuance
According to a reliable informant, the island is inhabited by more than 700 people. Most of these people work either as a farmer or fisherman, actually. No wonder, they show a humble way of living and live harmoniously there. In terms of nuance, the island is covered by tons of coconut trees and it is surrounded by beautiful white sandy shores. Here is the good news. Kakorotan features a long and sturdy pier, so any boats can harbor without hassles. The next impressive feature is definitely the shores, which look both exotic and soothing.

Exploring Kakorotan Island
Being the part of Nanusa Sub-District in Indonesia, Kakorotan Island is considered accessible especially by boat. It is bordering with the Pacific Ocean in the east and Intata Island in the north, so the scenery is quite amusing. Due to such mesmerizing scenery, sightseeing and photography indeed become two major activities to do in Kakorotan. The best places to enjoy the activity are indeed the beaches. Moreover, tourists are able to enjoy swimming and snorkeling later. Have no worries. The waves are calm and the water is quite warm.

The next allure of Kakorotan Island is the local settlement itself. People who live on the island are friendly, after all. That means visitors are able to approach them without worries. The only issue is perhaps the communication, as foreigners need to come with a tour guide as their interpreter. As for the tip, an annual event is available for tourists to enjoy there. It is called Eha, which is the end of fishing season. Well, even though most of those people are a fisherman, some of them work as a farmer. No wonder, the island also features several farms.

What is more? Kakorotan Island is also known for its stunning underwater scenery. This explains why many tourists come to the island to enjoy snorkeling and diving. They want to witness various types and sizes of corals down there, after all. The most common species are Montipora and Porites. Do not forget the fact that the sea also features tons of exotic fishes!

How to Get There
From Manado City, tourists should take an airplane from Sam Ratulangi Airport and head to Melonguane City right away. This flight takes around 1 hour and 5 minutes, actually. Once arriving at the destination, they can get a boat service at the nearby port and head to Kakorotan Island by a speedboat. The voyage takes approximately 3-4 hours.