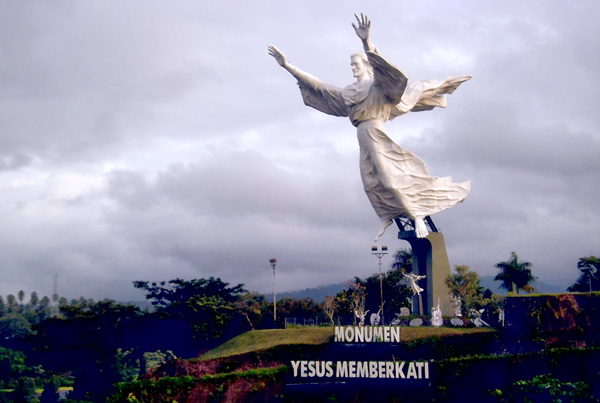 Porodisa or Talaud Regency has made a significant improvement in terms of tourism. One of the reasons is due to the construction of Yesus Memberkati Monument, which is similar to that or Rio De Janeiro. The prime function of the statue is to become a religious icon of the region. However, it also becomes another allure of Indonesia tourism. The location is in West Melonguane Sub-District and it resides in the local government’s complex.

The Nuance
The presence of Yesus Memberkati Monument shows the fact that the majority of people living in Talaud Regency are Christians. Still, everyone is allowed to visit the monument regardless of the religion and age. The most crowded time perhaps is during Christian big days or holidays! So, what about the size? The statue of Jesus has the height of about 33 meters! There are smaller statues scattered in front of it as well, having the shape of angels. The next recognizable feature is definitely the stairs. That means visitors should spend some effort if they want to get close to the prime statue.

Exploring Yesus Memberkati Monument
The monument has become a new identity of Talaud People since it was constructed. It shows the major religion of the locals, which is Christianity. Aside from that, the monument also becomes another tourist site in Karakelong Island. Well, the best time to visit the monument is during Easter though. The nuance becomes merrier due to the presence of worshipers. The Christians come to the site either to pray or celebrate such big day, after all.

Here is the next allure. The monument is located on a hill, so visitors should spend short trekking in order to get to the location. Have no worries. It is going to be fun and comfortable due to the clean environment and refreshing air. One thing, it is recommended to carry bottled water and some snacks so tourists can enjoy these during the visit. The only consideration is only related to cleanliness. That means they should avoid littering at all cost.

Photography also becomes a popular thing to do in Yesus Memberkati Monument. Taking pictures of such grandiose Jesus statue is quite satisfying, after all. Not to mention several other statues also reside there, which become a nice background for photography. Here is the thing. The nuance becomes merrier during holidays; so many people may swarm the site at the time. Somehow, it feels uncomfortable to take pictures and relax on the site. In this case, it is better to come aside from that time.

How to Get There
From Manado City, which is the capital of North Sulawesi Province, tourists can take an airplane at Sam Ratulangi International Airport and head to Melonguane Airport at Karakelong Island. Have no worries. The flight only takes about 1 hour and 5 minutes. Once arriving at Melonguane City, the next destination is West Melonguane Sub-District where the monument resides. The distance is 4.1 km, so the trip may take around 9 minutes.