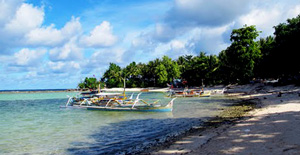 Talaud Regency is known for its beautiful islands. However, that doesn’t mean tourists should explore all of the islands during the visit in Indonesia. Instead, they only need to visit major islands including Salibabu. In terms of region, it belongs to Lirung Sub-District and located in the south of Karakelong Island. Not only Salibabu becomes a wonderful vacation destination for everyone, it also has become Talaud’s trading center for decades. In fact, according to the locals, the island was the place on where Talaud’s ancestors lived.

The Nuance
In terms of size, Salibabu is considered similar to Karakelong Island. Even it also features lots of natural attractions (just like its sibling). The best spots are definitely the shores, where beautiful white sand and blue crystal seawater resides. Not to mention the waves are quite calm! As for the fauna, tourists can find several unique local animals including Kuskus Beruang Talaud (a kind of marsupial). When it comes to flora, the island features both big and small trees. The good news is that tourists can also find several caves there.

Exploring Salibabu Island
Located in the south of Karakelong Island, Salibabu is indeed quite reachable. It even shares similar characteristics to such neighboring island, especially in the coastal area. The question is what tourists may do in Salibabu. The most common thing to do is to visit the beaches for sure. The combination of exotic white sand and crystal blue seawater is definitely amusing! People can enjoy swimming, snorkeling, beach walking, sightseeing, and relaxation at those beaches. What they need to consider is only the weather. It is better not to come during the rainy season.

The next allure of Salibabu Island is the history, which has attracted many historians and culture lovers over time. It is said the ancestors of Talaud People had visited and lived in Salibabu since approximately 25,000 years ago! The significant proofs are scattered in Liang Sarru Cave, which also becomes an allure of the island. Thus, no one should miss the chance to visit the cave later when exploring the island. Still, it is recommended to come with a tour guide or those who can tell thorough information regarding the history of the island.

Another recommended thing to do in Salibabu Island is to meet the local endemic animal called Kuskus Beruang or Ailurops Melanotis. It is even possible to approach and take pictures of them! One thing, tourists can only meet the animals at night. Also, it is important to hire a tour guide who is able to show the exact habitat of such exotic creature.

How to Get There
For those coming from Manado City, tourists can simply take an airplane from Sam Ratulangi International Airport and head to Melonguane Airport in Karakelong Island. For the information, the flight may take around 1 hour and 5 minutes. Once arriving at Melonguane, they should get the best boat service and head to Salibabu Island right away. This voyage takes around 2-3 hours depending on the type of the boat.