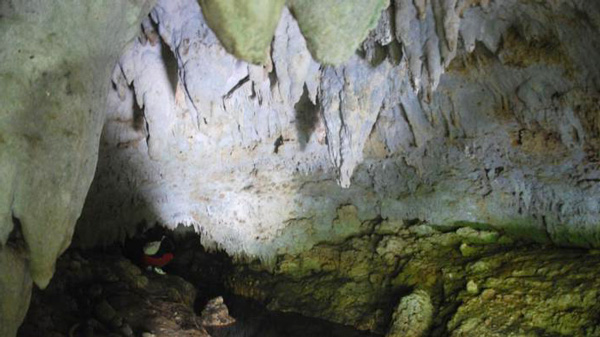 Several foreigners call Talaud Regency as a paradise land. As people may expect, this Indonesia region offers stunning natural attractions which are similar to a heaven! It consists of several islands, exotic beaches, and other types of landscapes. Do not ignore the fact that the region also offers some interesting caves to explore. For example, there is Weta Cave. The name derives from a person who found the site during the reign of Nippon back then. Aside from its historical value, the cave also becomes a perfect location to enjoy exploration and photography. As long tourists come with a local guide, they can avoid getting lost or spending too much stamina during exploration.

The Nuance
The first thing that tourists should know is related to the nuance. Weta Cave is located in the midst of a forest. No wonder, the atmosphere is both cool and refreshing. Not to mention tourists may find lots of big trees and lush bushes that surround the cave. In terms of size, the mouth cave is considered moderate so visitors are able to enter it without hassles. Like other regular caves, the ambiance is dark and damp. That means everyone should carry a flashlight and wear comfortable footwear when entering it!

Exploring Weta Cave
Those who often visit Weta Cave have a different reason to come to the site. Most of them, though, want to learn the history behind it. As mentioned before, the name derives from the person’s name who found the location. It is said the cave was used by the locals to hide from the Japanese Army back then. According to the reliable information, Talaud people hid inside the cave for months. Not to mention they only came out at night in order to avoid the sight of the enemies.

It is said the length or deep of the cave is around 400 meters and it connects to another cave located in a hilly area out there. The atmosphere is dark, though. That means visitors should carry a flashlight when exploring the cave. Not to mention it is recommended to come with a tour guide, who can give a reliable direction during exploration. Aside from the darkness, another hassle is the presence of small bats flying around inside the cave.

The next allure of Weta Cave is none other than the formation of stalagmite and stalactite located inside the cave. Both the shape and size are various, so tourists should take pictures of those objects later. Another allure of the cave is the location. It is because Weta is located in the midst of a forest. That means it offers both peaceful and refreshing atmosphere, which is suitable for relaxation!

How to Get There
From Manado City, tourists should take an airplane at Ratulangi International Airport and head to Melangguane Airport at Talaud Regency. For information, this flight takes about 1 hour and 5 minutes. Once arriving at Melanguane City, they can take any available local transportation service and head to the cave right away. One thing, the trip also involves a short trekking later.